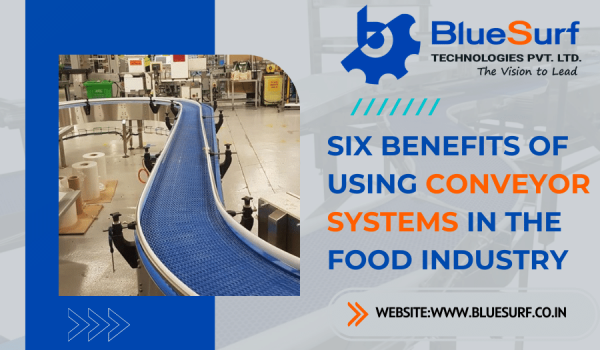 Material handling is essential in food processing and packaging. Raw materials and finished goods must be transported over long distances while remaining sanitary. Previously, food processing plants relied solely on manual labour to perform these functions, which consumed a significant amount of time and money. However, increasing levels of automation, such as the use of food handling conveyors, have transformed these operations. Continue reading to learn how food conveyor systems have improved quality, production efficiencies, and worker safety in the food industry.

Over the next 100 years, machine-powered conveyors would appear in a variety of industries. Sandvik, a Swedish engineering firm, produced the first steel conveyor belts in 1901. Conveyor belt systems, which were previously built with leather, rubber, or canvas belts, began using different fabrics or a combination of synthetic materials for the belts.

Conveyor systems have evolved over the years and are no longer powered solely by hand or gravity. In today’s food industry, mechanical conveyor systems are widely used to improve food quality, operational efficiencies, productivity, and safety. Mechanical conveyors are made up of a power mechanism that controls the conveying speed, a motor controller, a structure that supports the conveyor, and a material-handling mechanism such as a belt, tube, tray, or screw.

Are You Looking For Automated Product Packaging Services?

GET IN TOUCH WITH EXPERT

Belt conveyors, vibrating conveyors, screw conveyors, flexible screw conveyors, aero-mechanical conveyors, and tubular cable drag conveyor systems are the most common conveyors used in the food industry today.
Today’s technologies enable customised designs based on the client’s needs, such as how far materials need to be moved or at what speed these items will travel through the plant.
Modern conveyor systems can also be custom-designed by consulting experts who know exactly where power points are located within the facility so that everything runs smoothly and without hiccups from start to finish.

Increased automation in the form of food conveyor systems has provided benefits to the food industry that go beyond improved sanitation. Conveyors provided numerous benefits to food manufacturers who installed them. Among the primary advantages are:

When compared to using human labour, a conveyor system will complete your food processing activities much faster. Check out this page for more information on its operating systems. More work will be completed in a shorter period of time, increasing your company’s productivity levels. This frequently translates to higher returns, which is what every business desires.
Without a conveyor system, these processes will be handled by your team. This means that the top leadership must oversee the execution of operations to ensure that they are done correctly and without redundancy. Top management will be less productive as a result of the supervision.
With a conveyor system, however, they can concentrate on other core managerial operations that will result in profit realisation. This boosts productivity not only for your top management but also for your company.

When you run your food processing operations without a conveyor system, you must invest in a large number of workers. Because production is frequently done 24 hours a day to meet market demand, you must double your team, one for the day and one for the night shift. This means you’ll have to pay a lot of money to accommodate them, from wages to insurance to other benefits.
However, with the conveyor system, fewer workers are required. You may only require one or two on the ground. They will oversee the process to ensure that everything runs smoothly. Your operating costs will be reduced as you reduce the number of employees.

Employees are delegated to less physically demanding operations as the need for manual labour in food processing shifts to conveyor systems. The reduced amount of handling reduces the number of injuries on the job site caused by strenuous tasks.

Shifting the load from the worker to the conveyor reduces the risk of food product damage. You can adjust the speed, height, and include barriers to keep your conveyor system safe for employees.

When human labour is used to complete any task, there is always a high likelihood of error. This is frequently attributed to exhaustion, ignorance, or a lack of knowledge.
Errors in food production increase the likelihood of quality being compromised or systems being disrupted. How?
A worker may use the incorrect amount of an ingredient or place it in the incorrect chamber. If this is discovered early on, the production process can be repeated to correct the situation. On the other hand, if it goes unnoticed, what does that say about the final product’s quality?
When you use a conveyor system, however, everything will go as planned; there will be no deviations in the procedure. This means that quality is maintained throughout, increasing the likelihood of your company fully satisfying the needs of your clients. To ensure this, simply programme it correctly and without errors.

There are various standards that must be met in the food production process to ensure that the final product is fit for human consumption. This means that you must maintain high levels of hygiene in your manufacturing.
When using human labour, maintaining these standards may be difficult because someone may compromise something, with or without their knowledge. A minor lapse in quality control may render an entire batch unfit for human consumption.
The use of a conveyor system alters the narrative. There are conveyor systems designed for food production that are often sterile and anti-bacterial. This means that your food will always meet minimum quality standards that will be upheld throughout the process. To keep the conveyor belts sterile, simply clean them on a regular basis with the appropriate products.

Conveyor systems can change the speed and direction of material flow, making them a versatile addition to food processing operations. Because conveyors are modular, they can be reconfigured to meet changing production needs.

If you’re looking to expand your operations, a conveyor system is the way to go. The size of your production plant, as well as your budget, is the most important factors to consider when making this investment. You will benefit from the methods described in this article if you use a conveyor system.
Conveyor systems were initially developed to reduce the time required to move materials from point A to point B and to relieve workers of strenuous manual labour. Conveyor systems have evolved over time and now provide more benefits. Conveyors are excellent investments that help food manufacturers save money on labour, improve processes and productivity, and maintain food quality standards.
Please feel free to contact Bluesurf Technologies if you have any questions about using a conveyor system in your food production facility. We specialise in providing top-of-the-line conveyors to various food processing plants in order to help them grow their business.